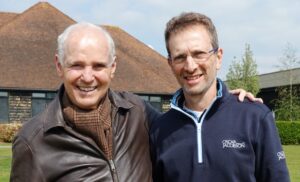 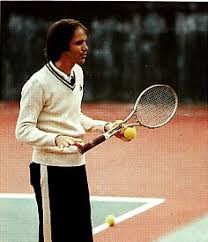 From Tennis to Golf

I had the privilege to meet with Timothy Gallwey (on the left), author of The Inner Game of Golf and arguably the founding father of the mental side of golf at Betchworth GC in May last year.

Tim was a proficient tennis coach and player but a relatively poor golfer.

He came across a way of coaching almost by accident. He was teaching beginners to play tennis; explaining the angle of the racket, body position, foot work etc, but few ball were coming back over the net. “Ok” he said try this, “bounce/hit” (bounce the ball once and just hit it). Remarkably, most of the balls came back over the net. By reducing the instruction to a level where the game became instinctive, his pupils were able to “let go”, play with “freedom” and begin to “have fun”.

Tim then thought how he could apply these principles to his golf game which, to date had eluded him. He’d read widely, visited a number of golf teachers, had a ton of information but couldn’t break 90.

So he headed to the driving range and translated “bounce/hit “to “back/hit” i.e. At the top of the backswing, he’d call out “back” and at impact he’d try to say “hit”, also out loud.

His buddy watched him and gave him feedback as to how close the two words were to reality. After only a few shots the words got closer and closer until he was in synch. He noticed a changed to his overall tempo; he no longer rushed his downswing but seemed to have created a slight pause at the top which helped his transition into the downswing (a change of direction back towards the ball and target) the quality of his ball striking also improved.

Action: Practice in your garden. Line up 6 tee pegs and make 6 normal swings with your driver (don’t change anything).

Then hit a further 6 tee pegs but this time saying out loud, “back” at the top of your backswing and “hit” at impact. Ideally have a housemate observe you and give you feedback as to how close the two words matched the top of the backswing and impact. Try to be more aware of your swing this time around. Note any tempo or balance changes.

The two sides to your golfing brain

Tim began to dig deeper and identified two sides to our golfing brains; Self 1 (also known as our ego) which wants to be in control, and Self 2 our natural talent which, if left alone, plays great golf!

With this knowledge he set himself the challenge of breaking 80 on his home course, even though he’d never broken 90 before.

He realised that conventional golf “teaching” was leading to an ever growing list of things to do (for self 1) and think about even before he attempted to hit the ball. A kind of “paralysis from analysis”; the longer the check list grew, the more tension crept in and his (self 2) tempo diminished accordingly.

The key was how to occupy Self 1, leaving self 2 free to play golf.

A good example of this in action is for someone to stand 3 yards away from you and ask you to catch a golf ball and then throw it back. Step further way and do it again, then further still. You’ll probably do the exercise with little thought at all (you’re clear of the target – your “self 2” instinctively calibrates the distance and launches the ball with sufficient power to reach that intended target. No thought of wrist/elbow angles, feet or body position – pure instinct.

So Mr Gallwey set himself a series of drills which successfully occupied “self 1” leaving “self 2” free to play golf.

Chipping – how to occupy self 1 (your ego)

When chipping, rather than be bogged down with a list of instructions like weight on the left, slight shaft lean, brush the grass, etc, he focused on a precise landing spot on the green; a leaf, dark stripe, etc. He then rehearsed a swing applying sufficient power to land an imaginary ball on the leaf.

He stepped up to the ball, took one last look at the leaf, and then just let it happen. There was no noticeable delay (a delay would allow other thoughts to bubble up in his mind). The shot wasn’t rushed, he just knew that once he’d looked one last time at the landing spot, looked back at the ball – that this was the point of no return and he instinctively pulled the trigger – totally absorbed in the task.

So did Tim manage to break 80 for the first time? Well you’ll just have to read his book to find out.

Playing golf with instinct creates freedom which in turn reduces tension. However, its’s very hard to “let go” so find something to occupy “self 1” with like focusing on the target, a landing spot or your breath. This will free up your “self 2” or natural talent to get on with “playing golf.”

If you’d like to explore this fundamentally different way to learn and play golf, please get in touch.